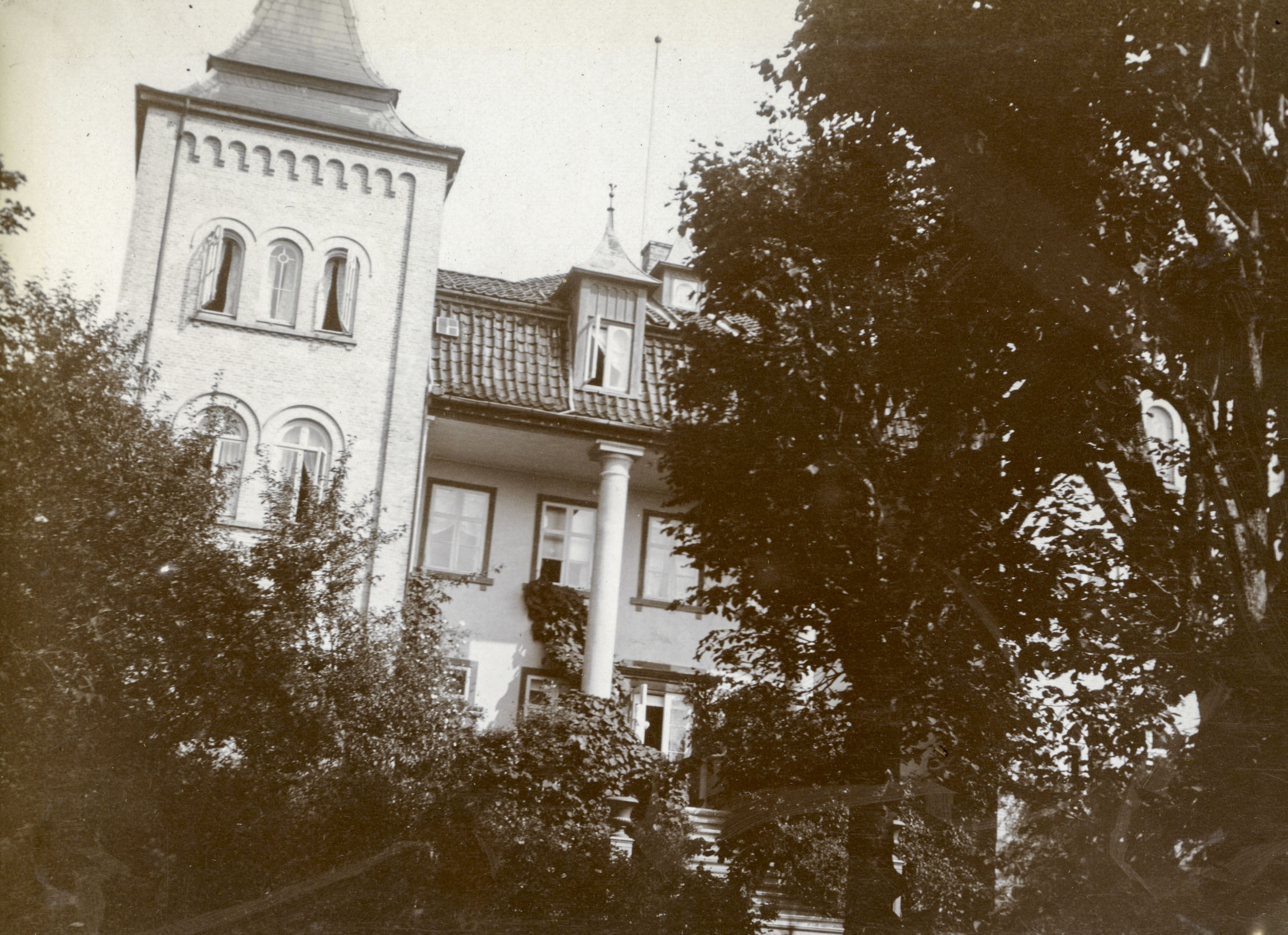 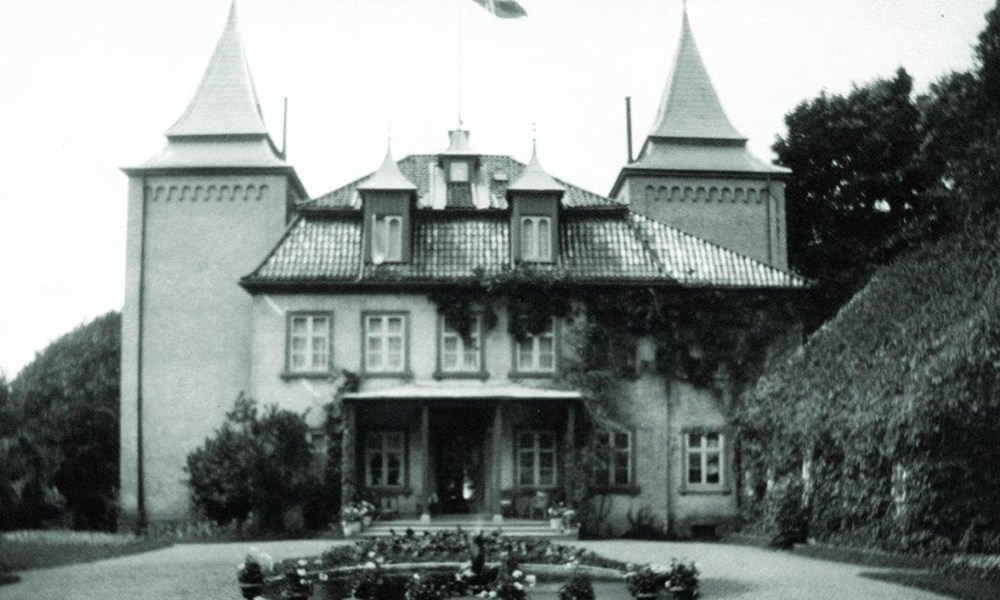 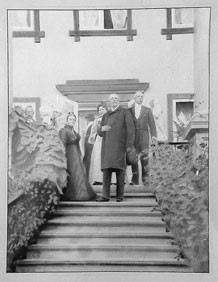 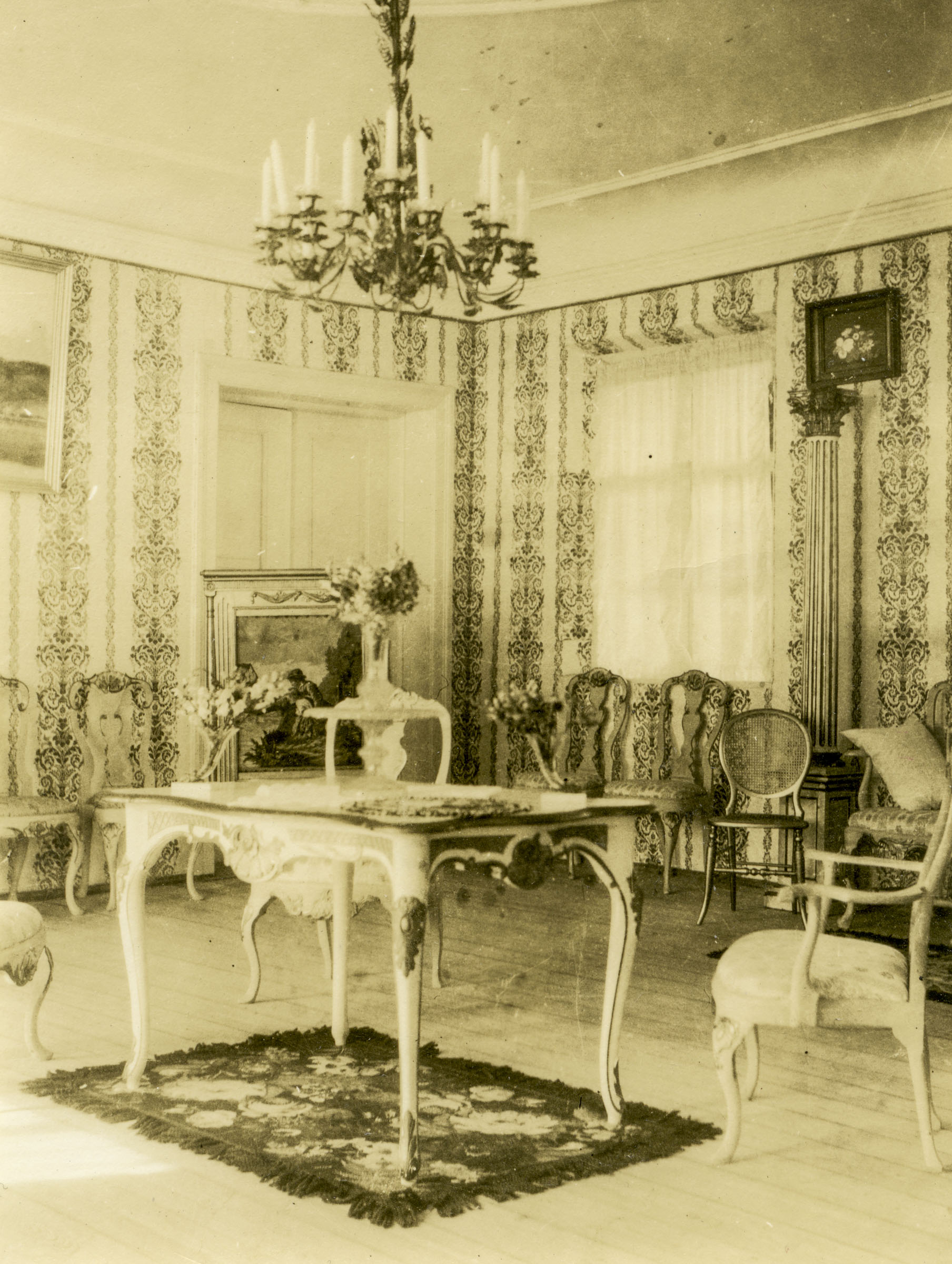 Jeløy, an island in the Oslofjord has a very unique and charming distinctive stamp. Professor Carl W. Schnitler (1879 – 1926) wrote in his work about the Norwegian gardens: How beautiful and magnificent Jeløy is, with its smiling grace, its wide and sloping landscape and the avenues and gardens that remind us of historical wealth and culture.

The name Refsnes originates from the Norwegian word for ‘reef’, Riv or Rev. Nes means the type of coastline where the building is positioned along. A reef by the nes. Before Refsnes Manor was built there was a small farm on the site dating from the 13th century, which was, like most of the mansions and farms on Jeløy, owned by the Bishop of Oslo. The emplacements first private owner was Jens Tollefsen dated around 1723.

It was the Chrystie family who built Refsnes Manor as a summer mansion. The Scottish Andrew Davidson Chrystie was the forefather of the Chrystie family and emigrated from Scotland to Bergen in 1654. One of his brothers’ sons was Andrew Chrystie who changed his name to Andreas Kreisti so that it would not resemble the name of Christ too much. He moved to Moss in 1726 and lived there together with his oldest son David Chrystie (1729 – 1796). David Chrystie married Sophie Elisabeth Thaulow (1739 – 1779), a very distinguished lady in Moss in those days.

They spent the summers of the 1760’s on Torderød, another beautiful Mansion on Jeløy. There are given several reasons why they built and moved to Refsnes Manor in 1767. One of them is that Sophie thought it smelled too much ‘cow’ on Torderød because the main building was built too close to the stables.

The youngest of their sons was also called David Chrystie (1771 – 1835). He inherited Refsnes in 1794 after his father. David senior, as he was often called, became a very important man for the town of Moss. He established a civil school, helped to establish the Norwegian bank ‘Sparebanken’ and was deeply involved in the development of a school for the working class in those days. He was married to Elisabeth Sophie Krefting (1773 – 1868). She was, like her mother in law, called Sophie Chrystie. They never had any children but both of them where very preoccupied with the people around them.

Sophie was a significant lady and in many ways, she was ahead of her time. She really enjoyed the summers at Refsnes where she could gaze across the fjord at Falkenstein in Horten where she was raised. She loved to ride her horse at high speeds from Refsnes to Moss, to a great alarm of the other ladies.

Sophie was a witty, entertaining but yet sophisticated hostess. That she was a beautiful lady can be seen on a painting of her in the National Gallery. This painting was painted by the Danish artist Jens Juel on a visit by David and Sophie to his house in Denmark.

The summer mansion of Refsnes was a hospitable home and Sophie wrote in a letter to the city councillor of Copenhagen Pram: I love to have people in my house and I am most happy when there is a lot of life here and when everybody says that our house is the finest and most enjoyable in town.

In 1816 they arranged a masquerade ball for more then 300 guests. It started in the afternoon and went on until the morning the day after.

Sophie was often visited by Camilla Collet and Camilla wrote in the mansions guestbook: this well established and rich family did everything to make their guests feel at home. Many letters and diary entrees witness of famous balls and parties where David and Sophie gathered people from all walks of life.

After 50 years of ownership, Sophie sold the manor in 1844. It was then owned by Jens Kristiansen for a short period of time before being purchased by Consul Lorentz Meyer from Christiania (Oslo) in 1855. He soon became very fond of Refsnes and he too stayed there every summer. His family needed more room but that problem was ingeniously solved by the construction of a three floor tower on each side of the main building. It is assumed that those towers were constructed after drawings made by Christian H. Grosh because the towers resemble quite literally the tower of the old fire station in Christiania which was designed by him as well. This is when the Mansion received its distinct looks it has today.

It was especially when Lorentz Meyers daughter, Sophie, owned the manor, that famous personalities again enjoyed the hospitality of Refsnes Gods. Sophie was married to a police physician named Haakon Boeck. Dr. Boeck once met Ibsen when visiting Gude on Fæste Mason. In the summer of 1894 Ibsen received an invitation at his home in Christiania from Boeck to Refsnes. Ibsen could not make it as he was busy writing ‘Lille Eyolf’. He wrote a very kind letter back to thank Dr. Boeck for the invitation. A copy of this letter can be read in the reception area.

On the 4th of August 1898 King Oscar II came to visit Refsnes. A picture taken on that day after dinner outside in the courtyard is now hanging in the ‘Kongesalen’ (king`s hall) at Refsnes Manor. And this was not the only time the King came on a visit to this great house in Moss.

A couple of famous artists like Edvard Munch. Peder Balke, Theodor Kittelsen and Hans Gude have all expressed their enthusiasm about the special atmosphere and beautiful location of Refsnes Manor. Hans Gude wrote in his reminiscences about his visits to Refsnes in the years 1892 – 1898:

…Where there are old trees as big as you only see in Denmark and Germany. –And when I add to this that we were surrounded by the kindest neighbours whose hospitality and kindness made this outdoor life a festivity on every occasion…

Especially Edvard Munch was fascinated by Jeløy. Sunny and fertile and positioned centrally between Christiania and Gothenburg and the towns Munch frequently visited on the continent. Munch rented Grimsrød Mason, owned by Lady Widow Olsen on Jeløy, in the years 1913 – 1917. But already before this he had visited some of the mansions on Jeløy, and Refsnes was one of them. Grimsrød was his home and the landscape his inspiration. The many rooms at Grimsrød were used as ateliers, printing studios and storage rooms for the many prints and paintings he produced. Munch himself only lived in a couple of the smaller rooms in the building. He painted the world around him and in his art he deliberately tried to express a solitary life together with the animals around him. In those days Edvard Munch wrote to a friend: ‘’When I get older, the differences between animals and people are more and more fading away’’. Especially his painting ‘Homebound Workers’ (Arbeidere på hjemvei) became one of his famous works. The inspiration for this one was found right outside his front door when Moss glass factory was located not far from his home Grimsrød.

It was in 1938 with Ragna and Olav Fjeld as owners that “Slottsrestauranten” opened in the main building. The Christiansen family ran a restaurant in 1955 under the name of ABC Refsnes Gods. In 1971 they built in cooperation with the industry in Moss the 2 hotel wings. The Salbuvik family took over the place in 1998, and with a vision that hospitality should include an atmosphere characterized by historical sophistication, service, food and wine in top class, mixed with over 400 classic and modern artworks, each room has its own small gallery.

We are proud that in 2011 Refsnes Gods was awarded the Norwegian Heritage Foundation Olavsrosa for the preservation and dissemination of the old main building, combined with exquisite art experiences. Quality-labeled Olavsrosa is awarded high-quality places that have a foundation in the Norwegian cultural heritage and are open to the public. We are also member of The Historic Hotels and Restaurants in Norway and Historic Hotels of Europe, and are happy to tell our story.

We wish you a pleasant visit and if there is anything we can do to make your stay even better, don’t hesitate to let us know.

Sincerely, and on behalf of all employees,